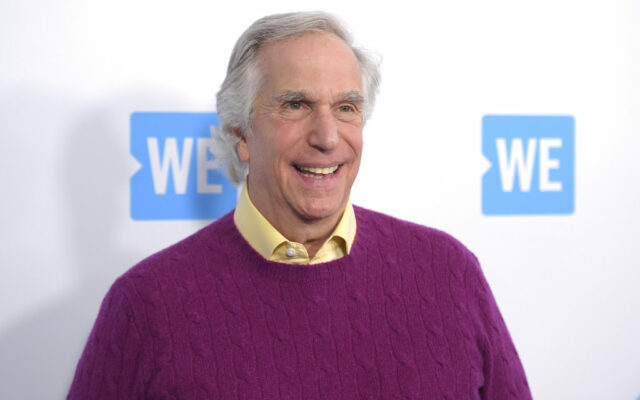 Henry Winkler arrives at WE Day California at The Forum on Thursday, April 19, 2018, in Inglewood, Calif. (Photo by Richard Shotwell/Invision/AP)
Aaaaaaay! Henry Winkler Is Auctioning His Original Fonzie Jacket Henry Winkler, who played Arthur “Fonzie” Fonzarelli on the hit sitcom “Happy Days”, is parting ways with his iconic leather jacket. Winkler has held on to two of his character’s jackets, while one of the only other existing jackets was donated to the Smithsonian, one was stolen from Paramount and two were owned by the show’s creator, Garry Marshall. The jacket being auctioned off is a part of an entire original “Fonzie” outfit complete with blue jeans, white T-shirt, and biker boots and is worth about $50-70K. The proceeds from the outfit will go towards a non-profit organization, This is About Humanity, founded by his daughter, Zoe Winkler. Have you ever seen an episode of Happy Days? What’s a movie/tv show prop that you would love to have?